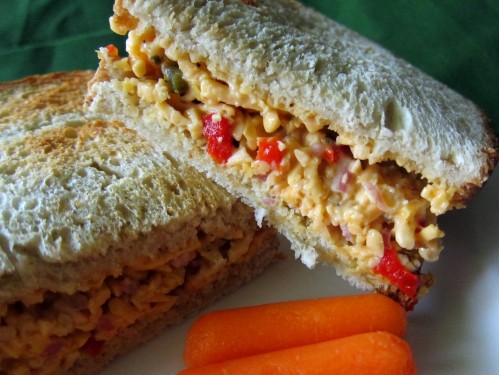 If you would have asked me 10 years ago if I liked pimento cheese, I would have said no. A strong harsh no. What I’ve seen in stores as a mayo-heavy cheese mixture with little flavor, never appealed to me in any sense. Never say never. A year ago, for lunch, at a mediation of all places, the mediator served a variety of sandwiches, including the pimento. I tried it. And, I loved it. Unlike the usual pimento cheese spreads, this had a distinct cheddar and pepper taste and was low on the mayo. After an hour, I realized I had eaten all the pimento cheese sandwiches on the platter. Luckily, my client was too nervous to eat or notice. 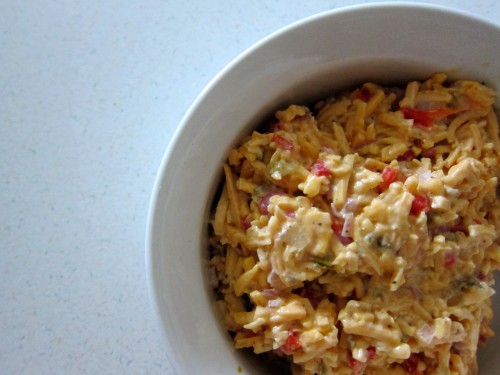 I have finally recreated a version that I am quote proud of and is delicious. I do not prefer creamier pimento cheese spreads. I like to have a substantial shred of cheddar cheese. My recipe is a twist on the classic. Adding shallots and pickled jalapeno for a crunch and kick. While you can certainly eat it the day of, I recommend letting it sit for at least two hours for the flavors to blend. I let it sit overnight and Binks agreed that the flavors settled better.

Filed under Appetizers, Side Dish, Vegetarian

So, A Priest and A Lawyer Come for Lunch…

Binks and I had our priest over for lunch.  I was given one day’s notice (he travels a lot) and thought of a great easy lunch idea that won’t leave you weighed down.

Cucumber sandwiches with a dash of Tabasco mixed into the cream cheese – it totally makes a difference.

Salad with homemade dressing (red wine vinegar, dijon mustard, lemon juice, olive oil, fresh black pepper, and a pinch of cumin).  And you can see a tiny portion of the M&M cookies we had for dessert. 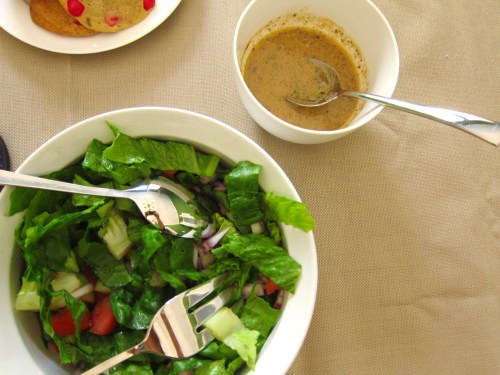 The most delicious pasta salad ever!  (I reduced the oregano and the whole salad could have easily been missing the pepperoni.)

I ate this pasta salad for the remainder of the week.  Refreshing and totally hits the spot.  I have to say the tiny bits of cheese were perfect to bite into.

All in all, it was a great time with a good friend and food.

The lunch inadvertently lasted from noon to 5 p.m.  Thank goodness for sandwich snacks along the way.

What would you serve for a lunch gathering?  (I might be the only one but I love dreaming up menus for different events.  Judge me if you wish.)

If you follow me on Twitter, you know that Binks signed us up for the annual Bay 2 Breakers 12K.  This year was especially special because it was the 100-year anniversary.  Pretty crazy huh?

Now, the 12K amounts to about 7.5 miles.  I wasn’t worried about that.  Binks and I walk about 8 miles per day on a vacation just touring a city.  We’re insane like that.  But, San Fran is not just any other city.  If you have climbed any of its streets, you know what I mean.  I was winded after one.

So, when I heard/read that the B2B has a 11.5 grade incline known as the dreaded Hayes Hill, I was worried.  Real worried.  I can walk but after my experience with San Fran hills, I was shaking.

Despite my worrying, we started. 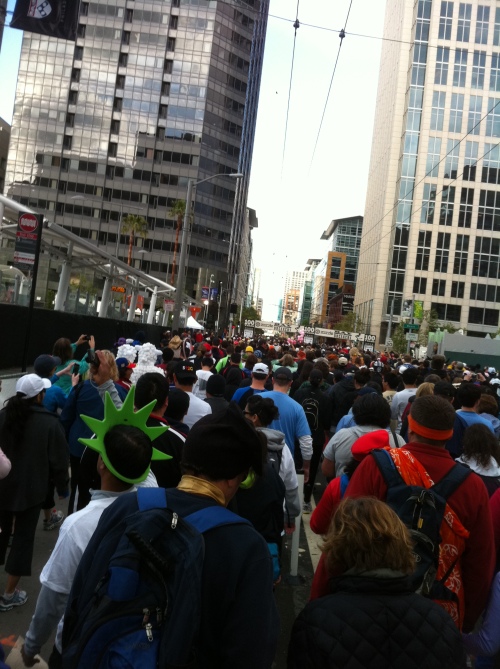 I enjoyed the costumes.

I enjoyed the lack of costumes.

Mind you, I was warned/aware of the nudity.  But, I never got used to it.  All I could think about was chaffing, sweating and odor.  No one said my thoughts had to make sense.  It kept me entertained.

Which is exactly what I needed to conquer the Hayes Hill Beast. 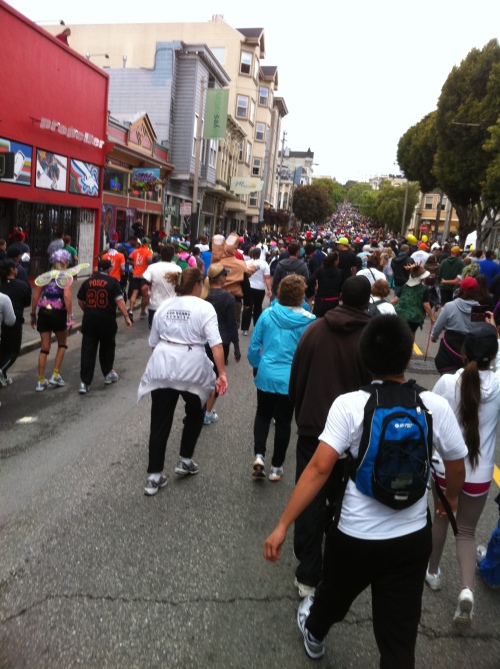 This picture does not do it justice.  After you walk for 2.5 miles, there are 5 blocks of hills.  One right after the other.  So, me, being me, climbed one hill right after another.  And, before I knew it, it was done!  I can tell you that it was a proud moment for me.  🙂

Finally – the finish line.  And quite well for my standards.  I don’t run and have never walked a 12K.  I didn’t practice all that much for this 12K (meaning the days before, I walked about 2-3 miles a day with my dog).  I maintained a 3 mph pace and was done in less than 3 hours.  I was quite pleased. 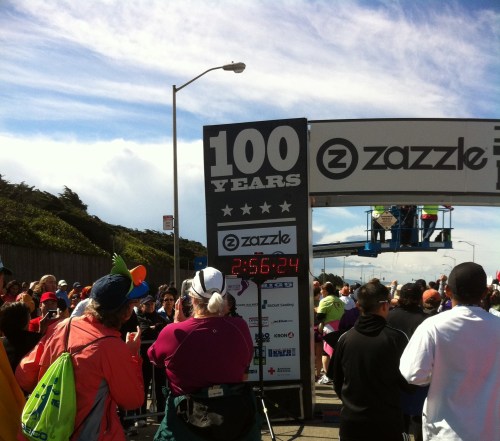 Although this finish line is a bit of a farce for me as a walker because you do have to walk about another 2 miles to get to the vendors and collect the medal.  So….I paced and timed and measured myself.  All in all – that day, I walked 9.9 miles.

It was a glorious day.

Afterwards, I went back to my hotel, showered, packed up and headed out for the road trip.

But, not without food.  We stopped for sandwiches just after getting out of San Francisco.  We found a local place in Pacifica called Colombo’s Delicatessen.

Binks had the Sicilian, which consisted of italian sausage and ricotta cheese.

The peppers made this sandwich.  Yes, that is my bite of HIS sandwich.  I believe in sharing.

I had the chicken Parmesan sandwich.  I usually don’t order this but it was their special for the day and I had to try.

The best part was the bread.  This family owned and operated shop bakes their own delicious soft bread.  It made all the difference.

Although, I didn’t know it was going to be so huge so we saved the other half for later.

And, then we were off down the coast with nothing but blue skies. 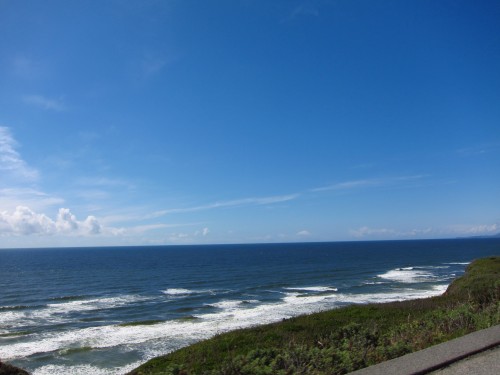 What’s the craziest/longest/most challenging race you have completed?  Why was it so crazy/challenging for you?  How did you feel after?  How did you prep (physically and mentally for the race)?

Back to the Routine, Almost

I have to say that after the trip to India, the Christmas feast, and the leftovers after, I’m back to being in my routine of making oatmeal/smoothies for breakfast, something for lunch (sandwich/leftovers) and a healthy dinner.  Oh how I missed my routine!

So, say a big welcome back to my bowl of oats!!

I love a good bowl of cinnamon oats with a dollop of pumpkin butter – yep, that’s right – I’m still not over pumpkin yet!

For lunch, we went to McAlister’s Deli for the first time. 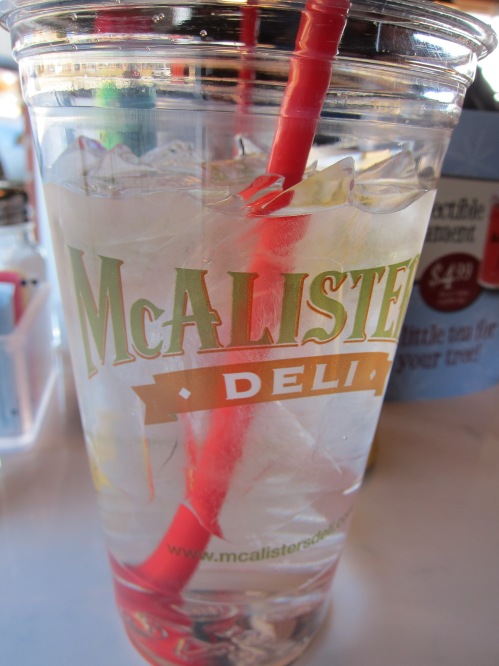 I don’t usually go out for lunch (as much as I want to), but Binks and I stepped out of the norm.  As some of you know, sandwiches are my favorite food.

So, I ordered half a grilled chicken club and a cup of chili. 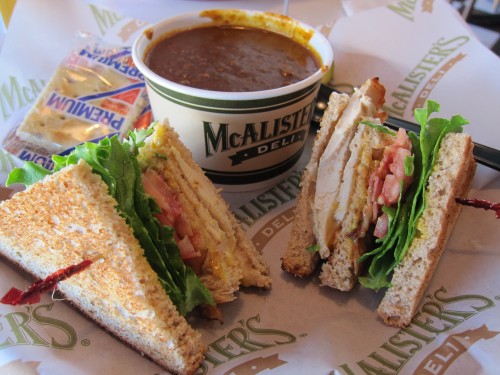 Binks ordered half a submarine and a cup of chicken tortilla soup.

I have to say, I was disappointed.  You can’t tell from the pics, but the sandwiches were small (esp to be charging us approx. $18 for both meals), and really lacked flavor and any substance.  Binks’ sandwich had a couple of slices of meat and my grilled chicken tasted like hospital food.  The worst was Binks’ soup – usually tortilla soup is more watery, right?  This soup had a consistency of broccoli and cheese, but more gelatinous-y.

What bothers me more is the service.  Two little meals took about 20 minutes to bring out and the waitress cleared my table before I was even done.  Game over.

I’m sorry McAlister’s.  Considering, I don’t go out to lunch much and sandwiches are my favorite food ever – you scored a 2/10.

Dinner was the best yet.  I didn’t feel like a whole meal but was craving dough balls like mad.  So, after much fighting with my sofa, I got up.

And, look what happened:

I made them with Earth Balance and a flax egg.  Delicious. 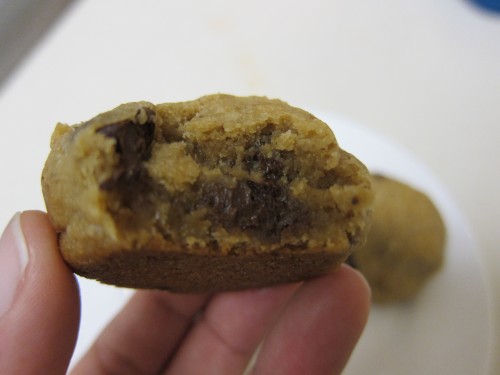 Can we say money shot? (I didn’t let them cool…whoops!)

Ahh…It’s good to be home.

*Update:  The one thing I’m still off on when it comes to routine is my exercise routine.  What do you all do for exercise?  I don’t know if with the weather I can run outside or at least trust myself to run outside.  So, what do you do?